To be fair, it didn’t come at me. I sort of ran right into it. At the time, I was barely 17 and working my first job at Disneyland. My parents let me drive their huge Buick Century. It was this bright blue metallic color with a white hood and had one of those bench seats where you needed two people to move it forward. It was the perfect car for a teenager because it was built like a Sherman tank. I had just punched out at Harbor House and got in my car to go home. I looked behind me and in my rear view mirror and as I slowly pulled out, I felt this CRUNCH! And I heard it too. I pulled back into my parking spot, got out of the car to see what had happened, and noticed my rear fender had this big gaping indentation in it. I looked to see what had caused it and noticed the light pole behind me. To make matters worse, this wasn’t just a skinny metal pole stuck in the ground. It was a huge 30-foot tall pole about a foot thick surrounded by a base that was about three feet wide and painted a super bright yellow. I felt like an idiot. It just happened that the pole was right in my blind spot and the bright yellow base was below the sightline of my car. I couldn’t see it. But I wonder, if I had just been paying better attention might I have avoided it altogether?

We run into light poles all the time. I don’t mean literally (although if you’re like me maybe so), but metaphorically. These poles sit in our blind spots and had we only been aware, if we had only seen the signs, if we had only paid attention, maybe we might have done something different. But sometimes we stop looking around. We develop a kind of tunnel vision and only see what we want to see or what we expect to see. The world around us however doesn’t stop just because we stop noticing. God is like that. God keeps working in our lives and in the lives of the people around us even if we stop noticing. Because God is not limited by our narrow perspective of the world. God is so much bigger than that. If you have a Bible or a Bible app on your phone, would you please turn to Matthew 1:18-25. Matthew 1:18-25.

One of my favorite stories in the Bible is the story of Gideon.

Gideon was the least likely candidate to be used by God, and who doesn’t like a good underdog story? When the angel of the Lord came to him and proclaimed that God was with him, Gideon told the angel, “My clan is the weakest in Manasseh, and I am the least in my family.” In other words, there was no one less likely to deliver Israel safely out of its enemy’s hands than him. Not only would his own clan deem him unable to do it, but Gideon himself couldn’t see any possible way for God to use him. But God used Gideon because Gideon was willing to follow where God led, even though God asked Gideon to do some pretty ridiculous things. He told Gideon to tear down the altar to Baal that the town had constructed and he did it, even though he knew it might have dire consequences. Sure enough, when they townspeople found out it was Gideon, they wanted to kill him. And had it not been for Gideon’s father and his quick wit, they just might have. Somehow, this incident emboldened Gideon or gave him a bold reputation and he was able to gather an army against the Midianites who had invaded the land of Israel. But God told him there were too many. If I were Gideon, I would probably have thought God was crazy. Too many? Against an army of 15,000 Midianites? So God had Gideon whittle down the number to 300 instead. And against an army 50 times stronger than their own, they defeated them. 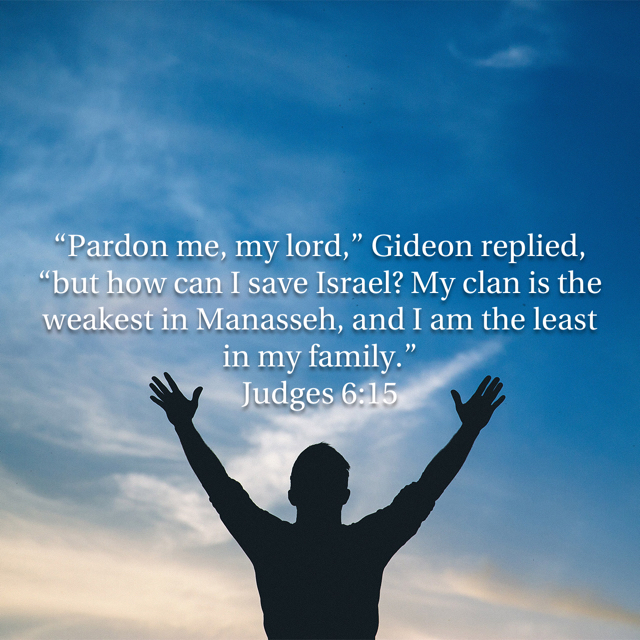 God’s ways are not our own.

We have a hard time overcoming our own perspective of how things should be to embrace how things could be. Instead of listening to where God is leading, we follow the road we know. We do things we are familiar with. We keep treading the path that others have gone down before us, but perhaps – just perhaps – God is leading us down a NEW path. And if we don’t pay attention, we might hit a light pole instead. This was how Christ came into the world. Not as we would expect but in his own way.

18 This is how the birth of Jesus the Messiah came about: His mother Mary was pledged to be married to Joseph, but before they came together, she was found to be pregnant through the Holy Spirit. 19 Because Joseph her husband was faithful to the law, and yet did not want to expose her to public disgrace, he had in mind to divorce her quietly.

20 But after he had considered this, an angel of the Lord appeared to him in a dream and said, “Joseph son of David, do not be afraid to take Mary home as your wife, because what is conceived in her is from the Holy Spirit. 21 She will give birth to a son, and you are to give him the name Jesus, because he will save his people from their sins.”

22 All this took place to fulfill what the Lord had said through the prophet: 23 “The virgin will conceive and give birth to a son, and they will call him Immanuel” (which means “God with us”).

24 When Joseph woke up, he did what the angel of the Lord had commanded him and took Mary home as his wife. 25 But he did not consummate their marriage until she gave birth to a son. And he gave him the name Jesus.

From the way he was born until the day he died and rose again, he didn’t do things the way the Israeli people expected. He wasn’t born to a royal family. He didn’t become a great military commander, riding a war horse and leading the troops of Israel into battle. Instead, he was born to a carpenter and his wife. He grew up fairly uneventfully except that he was exceptionally wise. He broke the rules and did work on the Sabbath. He was kind to women and children. He had dinner with tax collectors. He treated a Samaritan woman with respect. He chastised the temple leadership. He died as a blasphemer and a criminal. And he rose from the dead. Pretty much nothing was the way the Israelites had imagined and yet had they only been aware, had they only seen the signs, they might have known. He fulfilled the prophecies. He obeyed God. He performed miracles. But the people were so disturbed by what he said and what he did they couldn’t see him for who he was – the Christ.

If we are called to be God’s people in the world today, maybe we should be doing the unexpected.

When the early Christians saw people by the thousands converting to a faith in Jesus as their Lord and Savior, it was because the early church was doing things nobody else did. They sat with the sick even at the risk of their own lives. They gave to the poor. They helped the needy. Nobody was doing that back in Jesus’ time at least not in the way those early disciples were doing it. Sure the Israelites had provisions for the poor, the widow, and the stranger, but these early Christians were self-sacrificial in a way others just weren’t doing. And it was that radical behavior that convinced thousands to believe in Jesus. I’ve said it before, but I’m convinced Craig Groeschel, the lead pastor at Life.Church, the largest church in the country, was right. He said, “To reach people no one else is reaching, you have to do what no one else is doing.” What does that mean to you?

Our God is the God of the unexpected.

He was able to work through the most unlikely people to do what needed to be done. Moses. Ruth. Gideon. And yes, even Jesus. So why are we constantly looking for God in the ways we expect of him to show up? Why aren’t we looking for that new way God might be trying to express himself in our life? We have to open our minds to new possibilities in every aspect of who we are and what we do so we don’t run into light posts but instead steer our lives into new directions and new opportunities. Because God is going to show up next in the person willing to take a chance on something radically different; on someone who is going to listen for God and be willing to follow wherever God takes him or her next. Think of the greatest inventions of our existence and ask yourself if most people believed in it. The telephone. The television. Talking pictures. The computer. The iPhone. The thought of putting what 50 years ago took up the space of multiple rooms in a building into your hand would have seemed unimaginable to most. But to someone, it was possible.

Emma and I just saw the musical Hamilton.

If you had asked me or virtually anyone ten years ago if a hip-hop, rap-filled musical about the first Secretary of the Treasury would be successful, I think you would have heard nothing but laughs. Today, it is regarded as one of the most brilliant musicals ever and has revolutionized what is possible for the future of Broadway. It opened up theater in a completely new direction that no one had thought would work, but it did. It was nominated for a record 16 Tony Awards winning 11 and has gone on to be a nationwide phenomenon selling out in theaters all over the country and cost for the tickets is not cheap. Hamilton was the first Broadway play to sell over $3 million in tickets in just one week. Despite the odds of being a success, Lin-Manuel Miranda followed his vision and it led him to a place no one had ever imagined possible. So dare to be different. Look for ways God is looking to stretch you. Open up your own world of possibilities and leave your life undefined by the world and free to go wherever God wants to take you. Pray continually about where God is leading you and don’t be afraid to go there. When we keep our eyes, ears, hearts and minds open to God’s tug on our hearts, we can avoid the light posts in life and head in directions we never thought possible. Who knows but God where we are headed next? In the name of the Father and of the Son and of the Holy Spirit. Amen.