Is Michael Jordan A Failure?

How can failure make you great?

Michael Jordan is arguably the greatest basketball player of all time.  There are others you might elevate to that lofty position –Lebron, Magic, or Kobe come to mind among many, but it would be hard to elevate any of them over Michael.  He led his team to six world championships and a world record 72-game winning season.  He has won the league MVP five times, been in 14 All-Star games, elected All-Star MVP three times, elected NBA Finals MVP all six times his team won, and led the league in scoring 10 times.  Yet Michael Jordan has failed over and over again.  But just because you fail doesn’t mean you’re a failure. In fact, Jordan cites all those times he didn’t come through as the reason for his success.  He once said, “I’ve missed more than nine thousand shots in my career.  I’ve lost almost three hundred games.  Twenty-six times, I’ve been trusted to take the game-winning shot and missed.  I’ve failed over and over and over again in my life.  And that is why I succeed.”[1]

Jordan is not alone in succeeding through failure.

Walt Disney was once fired from a newspaper job for “lacking imagination and having no good ideas.”  Thomas Edison was told he was “too stupid to learn anything.”  And a man named Akio Morita once made a rice cooker that couldn’t cook rice.  He only sold 100 of them.  But Akio didn’t give up.  Instead he founded Sony, a company known for their high quality work.[2]  All of these men failed, yet all of them are considered successful because they didn’t let their failure impede their progress.  To them failure wasn’t a limitation, it was an opportunity to find another way to succeed.

We all have limitations.

We don’t have enough money.  We don’t have enough time.  We don’t have enough resources.  But the difference between success and failure is in how we perceive these limitations.  Instead of looking at it as a barrier, those who are successful see it as a learning moment.  They don’t see failure as a statement about their ability, but as a necessary step TOWARD succees.  Thomas Edison made the remark, “I have not failed.  I’ve just found 10,000 ways that won’t work.”[3] Success or failure for us in the church is simple. It’s laid out in The Great Commission.  As Matthew writes in chapter 28 of his Gospel, Jesus tells us plainly, “All authority in heaven and on earth has been given to me. 19 Therefore go and make disciples of all nations, baptizing them in the name of the Father and of the Son and of the Holy Spirit, 20 and teaching them to obey everything I have commanded you. And surely I am with you always, to the very end of the age.”  Our measure of success is the entire world.  And we haven’t gotten there yet.  And if we stop trying to accomplish this mission, we go from failing to being a failure. 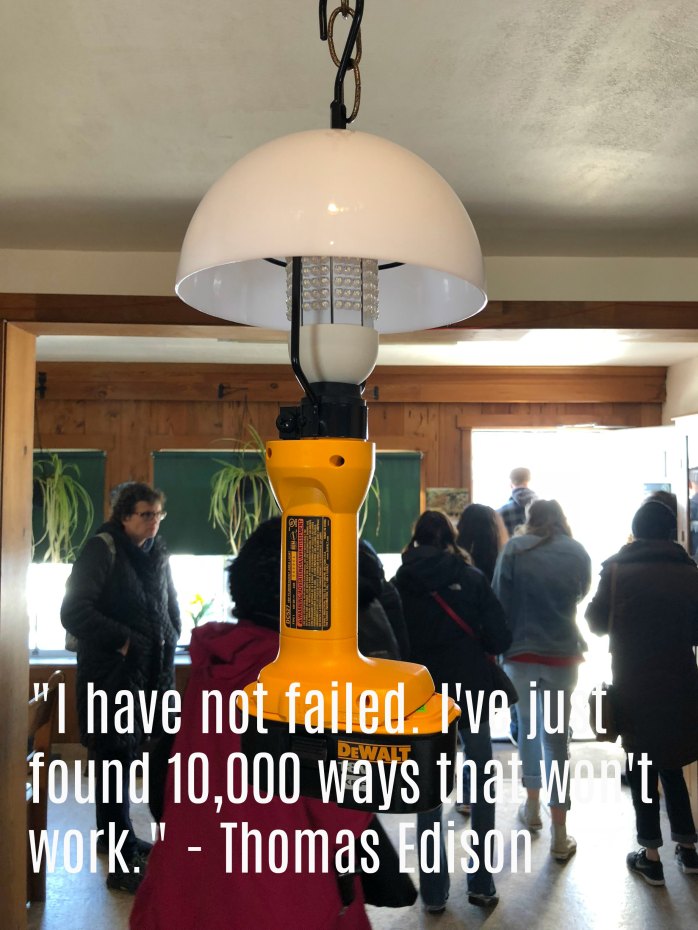 The apostles didn’t allow anything to stop them in their mission.

They faced the same problems in THEIR ministry as we do in ours – a lack of money, a lack of resources, and a sense that time was running out.  But instead of looking at these as limitations, they found a way to accomplish their goals despite them.  If you have your Bibles or a Bible app on your phones, please go to the book of Acts 3:1-9.  Acts 3:1-9.  This passage takes place not long after Jesus has returned to Heaven.  The Holy Spirit has descended upon the disciples and has empowered them.  And with this newfound power, they go out into the world and begin to make new disciples for Christ.  These new believers are so overwhelmed with the Holy Spirit that they form a fellowship that cares for one another and looks after one another in remarkable ways.  So the passage we’re about to read from Acts 3:1-9 is about the conversion of this beggar who sits at the gate.

One day Peter and John were going up to the temple at the time of prayer—at three in the afternoon. 2 Now a man who was lame from birth was being carried to the temple gate called Beautiful, where he was put every day to beg from those going into the temple courts. 3 When he saw Peter and John about to enter, he asked them for money. 4 Peter looked straight at him, as did John. Then Peter said, “Look at us!” 5 So the man gave them his attention, expecting to get something from them.

6 Then Peter said, “Silver or gold I do not have, but what I do have I give you. In the name of Jesus Christ of Nazareth, walk.” 7 Taking him by the right hand, he helped him up, and instantly the man’s feet and ankles became strong. 8 He jumped to his feet and began to walk. Then he went with them into the temple courts, walking and jumping, and praising God. 9 When all the people saw him walking and praising God, 10 they recognized him as the same man who used to sit begging at the temple gate called Beautiful, and they were filled with wonder and amazement at what had happened to him.

The miracle is the first thing that stands out, but is that what’s most important?

A lame beggar is sitting at the gate to the temple courts and as Peter and John are walking by he asks for some money.  But instead of giving him money, Peter heals the man’s leg!  This man who has never been able to walk before is able to get up and jump up and down.  The man instantly praises God.  His first act after receiving this gift is to praise God.  Most of us would say THAT was remarkable.  But consider this.  In his book “It” Craig Groeschel asked this question: what if Peter and John DID have money?  Peter says, “Silver or gold I do NOT have, but what I do have I give you.”  If they had money, would they have given this man what he asked for instead of what was needed?  Would they have been challenged to meet the man’s REAL needs?  Perhaps THAT is the most remarkable thing, that it is sometimes in the limitations that we find the most blessing.  Sometimes it is in the limitations that we find the most blessing.  Peter and John didn’t give up trying to help the beggar.  They didn’t ignore him or say “Sorry I don’t have any money to spare.”  They gave him what they could and it turns out what he really needed – the healing power of Christ.

Do we challenge ourselves to overcome our limitations like Peter and John?

Or do we use them as an excuse for not doing what needs to be done?  Being poor, small in number, and limited in physical ability shouldn’t be impediments, but simply define for us our boundaries.  It shouldn’t stop us from doing effective ministry, but instead give us a framework to do it in.  The disciples certainly were poor and small in number.  Maybe they had more physical ability than we do, being mostly fisherman or people who did manual labor, but there are lots of things they didn’t have that we do today.  A building for example.  A piano or organ.  Pews for sitting down.  A stove for cooking food.  Running water, air conditioning, a speaker system.  There are lots of things they didn’t have and yet they changed the world.  If our challenge is to fulfill the Great Commission then we have to challenge ourselves to ask what are WE doing to do our part?  We cannot allow our limitations to prevent us from doing what needs to be done.  We can’t allow our history, our personal preferences and our likes and dislikes hold us back from achieving for God what needs to be achieved, or we are guilty of being failures instead of people who fail.  Because everybody fails.  It’s what you do with your failure that determines your success.

We cannot afford to become complacent in our lives or in our ministry.  We have to always do “the next thing.”  Not the “popular thing” but the “next thing,” whatever that “next thing” is that meets the needs of our community and allows us to show them the love of Christ.  When Walt Disney created Disneyland, he wanted to create a place that families could take their kids that would be clean, fun, safe, and magical and where they could do things together.  When Disneyland opened in 1955 it hosted 50,000 people on that first day.  Certainly, most would have considered that a success.  In fact, in it’s first operating year alone, Disneyland had over a million visitors.  Walt could have stopped there.  Certainly, people would have come for quite some time as people did.  But Walt never stopped tinkering with the Park.  He once said, “Disneyland will never be completed.  It will continue to grow as long as there is imagination left in the world.”  He constantly challenged himself to do the “next thing” what he called “plussing it.”  Today more than 600 million people have visited Disneyland in Anaheim.  That doesn’t include the number of visitors to Walt Disney World, Tokyo Disneyland, Disneyland Paris or Hong Kong Disneyland either.  It is too easy for us to settle into old routines and habits and call them traditions.  We have to not only be willing to change, but be the catalysts for change in our communities.  Like Peter and John, we have to figure what it is that people need and give them that, and in the giving show the love and power of Christ.

Sometimes we are our own worst enemies.  We find ways to defeat ourselves before we even begin.

We imagine we can’t do something so we don’t even try.  We imagine we won’t like something, so we don’t even give it a chance.  But there’s more than one way to fail.  Wayne Gretsky, perhaps the greatest hockey player of all time, said, “You miss 100% of the shots you never take.”  How can we learn and grow from our mistakes if we’re too timid to make any?  The fear of failure in itself becomes an impediment to our success.  It becomes a limitation we put on ourselves.  I want to challenge you as we reflect upon what it is that holds you back, in your personal life, in your career, in your faith.  What is it that prevents you from doing the “next thing” and can you overcome that limitation?  Because I believe you can.  I believe we all can.  I don’t think it’s easy and I do think it will likely take us failing a number of times before we find what works, but it is within you.  The goal is to keep trying and IF we fail to learn from the failure.  Michael Jordan failed making more than 9,000 shots.  Walt Disney got fired for lacking imagination.  And Thomas Edison had to discover 10,000 ways to fail before inventing the light bulb.  And a man who made a rice cooker couldn’t cook rice founded a company that made nearly 80 BILLION dollars last year and employed over 162,000 people.  Not a bad way to find success in failure.

← The McDonald’s Connection
It Takes A Village →