This Message Is Biased 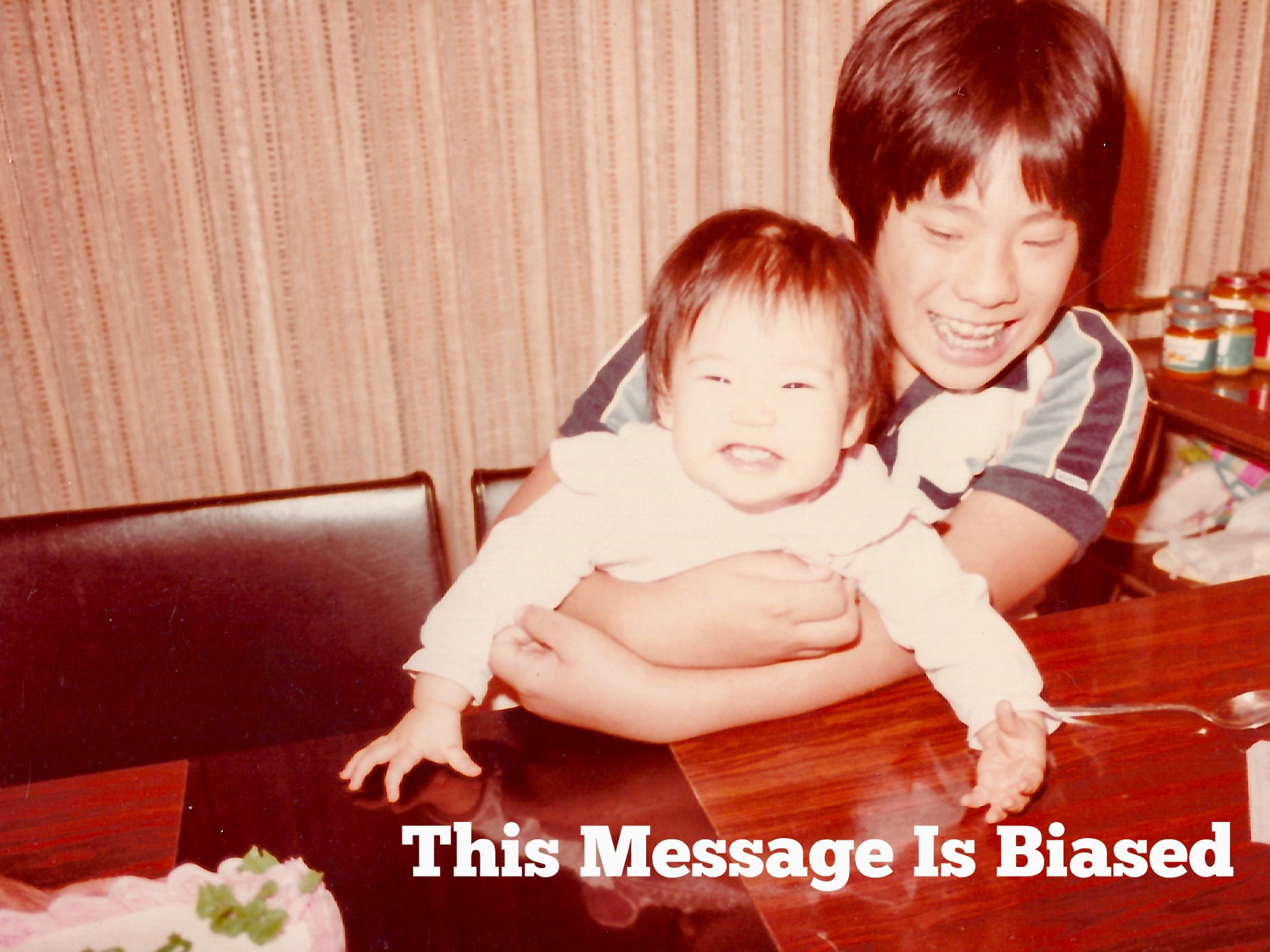 Nobody believes me, but this story is 100% true.

I used to secretly take care of my baby sister, Nicole.   My mom and dad were of the mindset that you need to let a baby cry her self to sleep. But they didn’t share a wall with her. My bed was right there and I could hear her clearly every night. And while I might mentally have understood the rationale behind letting her cry, there was the emotional side of me that felt like she was being tortured. It was one thing if she cried for a little while, but when it would get so hard you could hear her gasping for breath, I just couldn’t take it. The first time I tried to sneak out of my room to pick her up, I made the mistake of thinking my parents were asleep and got caught. “Let her cry. It’s good for her,” I heard my mom say from her room. “Okay!” I said dejectedly. The next time, I made sure to be extra quiet. I found out that if I held up the side of the crib while gently pushing the hinge with my foot, it wouldn’t make any noise so that’s what I would do. I’d let Nicole cry for a while so it would seem she cried herself to sleep, and then I would go in her room, pick her up, and rock her in my arms. Sometimes her diaper was soiled so I would quietly change her and throw away the evidence. But if you ask my family about any of this, they would totally deny it. They say it never happened. And I would argue, how would they know? The whole point was that it was a SECRET!

We tend to see life from our own point of view.

Not that I blame anyone, but that’s just the way it is. We assume people share our values, our life experiences, and our perception of right and wrong. But they don’t. Not always. We might both agree that hurting someone is bad, but is letting a baby cry her self to sleep bad? Or is that actually a loving thing to do? Even when we seek the same goal, sometimes we can’t agree on the how we should get there. I think both my parents and myself wanted the same thing with my little sister – that she would stop crying and we could all get some sleep (just kidding Nicole)! But how we go about accomplishing our goals can be different. Mine, of course, was right. But isn’t that usually the case? We seldom take the time to stop and consider a different point of view.

It just means we all THINK we’re right.  And if we’re going to get along with one another, we need to take the time and effort to understand “the other.”  I don’t believe in relativism or relativistic thinking meaning I don’t believe that everything is “true.”  I do believe there are fundamental truths in the world.  Like love.  And Christ.  But we should at least consider other points of view before dismissing them out of hand.  Because when we ignore other ideas, we miss opportunities in life that could completely change the way we think and act.  We might miss opportunities to grow in our faith and to have a better understanding of the world.  It’s the arrogance of assurance – being so sure of your point of view and your beliefs that you are unwilling to be open to new ideas.  It’s the kind of thing that happened to the Pharisees when they encountered Jesus.  They already had their minds made up about him by the time we get to our reading today.  It pretty much didn’t matter what Jesus did, they thought he was a heretic and a danger to their way of life – even if that way of life was wrong like in this example from the Bible.

At that time Jesus went through the grainfields on the Sabbath. His disciples were hungry and began to pick some heads of grain and eat them. 2 When the Pharisees saw this, they said to him, “Look! Your disciples are doing what is unlawful on the Sabbath.”

3 He answered, “Haven’t you read what David did when he and his companions were hungry? 4 He entered the house of God, and he and his companions ate the consecrated bread—which was not lawful for them to do, but only for the priests. 5 Or haven’t you read in the Law that the priests on Sabbath duty in the temple desecrate the Sabbath and yet are innocent? 6 I tell you that something greater than the temple is here. 7 If you had known what these words mean, ‘I desire mercy, not sacrifice,’[a] you would not have condemned the innocent. 8 For the Son of Man is Lord of the Sabbath.”

9 Going on from that place, he went into their synagogue, 10 and a man with a shriveled hand was there. Looking for a reason to bring charges against Jesus, they asked him, “Is it lawful to heal on the Sabbath?”

11 He said to them, “If any of you has a sheep and it falls into a pit on the Sabbath, will you not take hold of it and lift it out? 12 How much more valuable is a person than a sheep! Therefore it is lawful to do good on the Sabbath.”

13 Then he said to the man, “Stretch out your hand.” So he stretched it out and it was completely restored, just as sound as the other. 14 But the Pharisees went out and plotted how they might kill Jesus. – Matthew 12:1-14

How sad it is for the Pharisees.

They were alive during the most incredible, miraculous moment in all of human history and their only thought is about how to kill the Messiah. They saw Jesus breaking the rules! But they didn’t think about whether or not those rules should be broken. They were so rigid in their thinking that they failed to see the most miraculous thing right before their very eyes. Jesus actually performed a miracle right in front of them! He healed a man’s shriveled hand completely and made him physically whole and the only thought in the Pharisees’ heads was, “How can we kill him.” But before we dismiss the Pharisees too easily, imagine ourselves in their shoes. Think about all the world’s ills that are caused because of our own short-sighted vision. The biggies like racism, sexism, and homophobia just to name a few. All justified by the Bible (supposedly). And later overturned by the Bible.

The truth is the Bible never said those things.

We just made it up. The entire justification for enslaving people from Africa came from a twisted reading from the story of Noah in the Old Testament where Noah’s sons find him passed out from a huge bender he had on his own.[1] His son Ham finds him drunk, naked, and passed out and tells his brothers about it and the brothers cover up their dad without looking at him. Instead of being ashamed at his behavior, Noah instead gets mad and curses, get this, Ham’s son, Canaan. Not Ham, but Ham’s son. Ham had other sons, too and nowhere does it say that Canaan was even around when all of this happened. But Noah lays a curse upon him anyway. Now instead of assuming that Noah was just a mean drunk or felt so embarrassed he felt he needed to blame someone, this passage got twisted to mean that God cursed all people with dark skin based on some faulty genealogy and a lot of assumptions about who was dark-skinned. Because I’ve looked, and it doesn’t say anything about any of this in the Bible. But people were so desperate to justify their sin of slavery that they twisted the Bible to say what they wanted it to say. Even though it doesn’t.

We generally look at life with our own lens and never think to take it off.

For literally centuries we robbed people of freedom because of the color of their skin. We robbed people of the right to vote because of their gender. We robbed people of their freedom to love because of their sexual orientation. And in each of these instances we used the Bible to do it. What we need to do is step back and look at life from both sides before jumping to conclusions. And especially before condemning people or saying that this is the way God wants us to behave. It’s hard not to think that our own biased viewpoints have directly and indirectly caused many people to not believe in Jesus Christ as their savior. After all, who would believe in a savior who was racist, sexist, or homophobic? I like the way Will Rogers said it in the 90’s musical Will Rogers Follies. He said, “I guess I met a whole lotta people in my lifetime. I always try to approach ’em the same way my Indian ancestors would. You see, an Indian always looks back after he passes something so he can get a view of it from both sides. A white man don’t do that. He just figures all sides of a thing are automatically the same. That’s why you must never judge a man when you’re facing him. You’ve got to go around behind him, like an Indian, and look at what he’s looking at and then go back and face him and you’ll have a totally different idea of who he is. You’ll be surprised how much easier it is to get along with everybody.”[2] In his book, 7 Habits of Highly Effective People, Stephen Covey put it this way, “Seek first to understand, then to be understood.”[3] Seek first to understand, then to be understood. He said, usually we do it the other way around, and I think he’s right.

I want to challenge you to take a step back.

In the heat of an argument, that’s especially hard to do. But I want you to try and see the other person’s point of view before you condemn them or count them as being wrong. Even if they are wrong, maybe you can try to understand why they feel the way they do. Even if they’re wrong, they might have a legitimate reason for believing whatever they are wrong about. And if we are patient and kind and forgiving (as we are supposed to be), then we might be able to help the other person or people to see more clearly. You never know, maybe you’ll find out that it was you all along who needed to make a change. We can’t help but see the world from our own point of view. It’s just who we are. But we CAN try to stop for a moment and step into someone else’s shoes when we do that we become more like our God in Heaven who literally stepped into our shoes through Jesus Christ to see the world through our eyes. Couldn’t we do the same for others?

[2] From Will Rogers Follies, “Never Met A Man I Didn’t Like”

← The Flaw In Our Gospel
Pictures on a Refrigerator →