The Lasting Power of Casserole 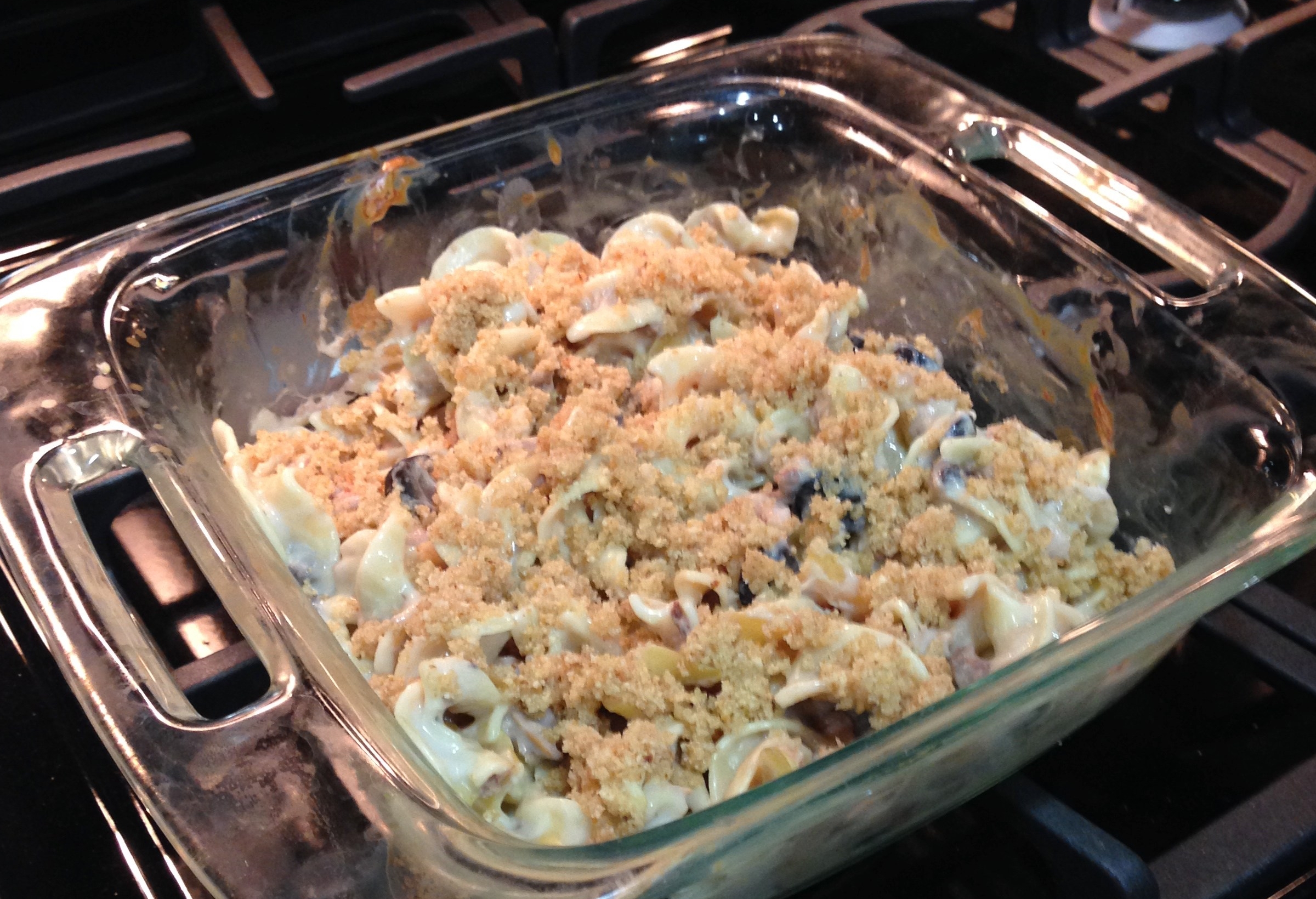 What do you think of when you hear the word “church?”

If you’re like most of us, you probably think of a white building with a steeple on top with a cross towering high overhead.  You might think about stained glass windows or pews or a preacher.  You probably think of pulpits and potluck dinners.  A lot of things with the letter “p.”  But none of those things are “church.” The church is really about a people instead of a place.  The word “church” comes from the Greek ekklesia or “assembly.”  It doesn’t by itself have any special definition beyond that.  But when Jesus asked Simon who he was and Simon said, “You are the Messiah, the Son of the living God,” Jesus responded, “…I tell you that you are Peter, and upon this rock I will build my ekklesia… my church…”  In that moment, the word ekklesia gathered a new meaning, because Jesus wasn’t talking about any old assembly of people.  He was talking about HIS assembly – the children of God.

But don’t let that go to your heads.

Being the children of God and acting like it are two totally different things.  It goes back to what we’ve shared before, “Being in church doesn’t make you a Christian any more than being in a garage makes you a car.”[1]  So what does it actually mean to be the church?  When we recite the Apostles’ Creed we say we believe in the “holy catholic church” and the “communion of saints” but to the outsider, it must seem like we’re kind of self-righteous.  I mean we call ourselves “holy” and “saints.” It doesn’t take a long, meaningful look into church history to realize there were plenty of times we didn’t act very holy or saint-like. But like most ideas, our concept of “holy” and “saint” has changed over time and we’ve added tons of meaning behind it that wasn’t there to begin with.  “Holy” simply means “sacred to” or “set apart for” and in our case holy means we are people who recognize we are set apart for God. That doesn’t mean we’re super-special or that God has a gold star next to our name. Being holy is our recognition that our lives are devoted to God and not the other way around. As Adam Hamilton wrote in his book, Creed, the church is holy “when those who consider the church home don’t ask ‘What do we want our church to do for us?’ but rather ‘What does God want his church to do for him?’”[2] The same thing is true for the word “saint.”  “Saint” is derived from the Greek hagios which is often translated as “holy.”  It simply refers to a person who acts as if their life belongs to God.

That is the work God calls on us to do as his people.

We are supposed to be the people of God in the world, but even our perception of “church” has evolved over the years. Today it’s more about a place than a people.  But that’s not at all the way God meant for it to be.  Back in the days of the disciples, they didn’t have a place of worship unless it was the temple.  By the way, that’s how much they loved God. Today a “regular church-goer” is someone who attends more than once a month but back then they would go twice in one day! First to the temple and then to the gathering of God’s people, usually in someone’s home.  God’s idea of church was something inside of us.  It wasn’t based on a location but anywhere the people of God showed up as Peter wrote in his letter to the church.

4 As you come to him, the living Stone—rejected by humans but chosen by God and precious to him— 5 you also, like living stones, are being built into a spiritual house to be a holy priesthood, offering spiritual sacrifices acceptable to God through Jesus Christ.

9 But you are a chosen people, a royal priesthood, a holy nation, God’s special possession, that you may declare the praises of him who called you out of darkness into his wonderful light. 10 Once you were not a people, but now you are the people of God; once you had not received mercy, but now you have received mercy.

YOU are the church!

Like the words to that classic hymn, “I am the church, YOU are the church, WE are the church together.”  And that’s what Peter was trying to make clear to the Christ followers of his time.  He told them God was building them up not from the outside but from the inside.  He was telling them, yes, God is building his church, but it isn’t a place but a people.  The spiritual house God is building starts with Jesus as the cornerstone and each one of us are the brick and mortar of this never-ending structure known as the people of God. In my head, I picture a sort of Winchester House for Jesus, a building always under construction, shaped by the people who comprise it.  If you’ve ever been to the Winchester House, you know that Sarah Winchester had the superstitious belief that construction on the house must be never-ending to appease the spirits of those killed from the rifles made by her husband’s rifle company.  Legend has it that Mrs. Winchester never stopped adding to her house, constantly adding new features, rooms, and adornments throughout her life.  That sense of never-ending construction of God’s house is how I picture each of us being worked on all throughout our lives; to become better disciples of Christ and to add to the beauty of the spiritual house we call the church.

Too often church becomes simplified to a building.

Or worse, the people of God forget they are the people of God and place so much importance on the forms and functions of “church” that they forget that “church” is just the people inside the building. And when the people inside the building act in ugly and unforgiving ways, when the people inside the building are unloving, unchanging, and unwilling, then the church begins to crumble no matter how beautiful the outside is.  When I was in seminary, one of my fellow pastors told us about a congregation he knew of that had split over a couch.  By all measure, it was an ugly couch.  It was lopsided.  It had lumps.  It was an eyesore to most.  But it was donated by a beloved member who had a lot of family attending that place.  For years, no one said anything but finally someone suggested they replace it with a new couch and almost immediately people took sides – those who wanted to keep it and those who wanted to get rid of it.  In the end, they couldn’t resolve their differences and they split the church in two.  Over an ugly couch.  It’s one of the reasons why I am opposed to putting plaques on anything.  I don’t know why we feel the need to memorialize someone by putting a metal plaque on some object.  It just makes it harder to get rid of when it’s time.  You know the old saying about not naming your food?  It’s doubly true for the church.  It makes it that much harder for us to let go of the trappings of church, even when we know we should.

For me, church became real in the power of a casserole.

Or many.  For all of the knowledge I had gained about what it meant to be a follower of Christ, it took on new life in a casserole dish.  When Cassie gave birth to Emma, the families belonging to our Sunday School group all took turns and brought food to us for the entire week.  THE ENTIRE WEEK!  And there was always enough for leftovers so I pretty much didn’t have to cook or make anything at all.  And they didn’t just bring casserole, but chicken and spaghetti and lasagna and other dishes so we had a variety every single day.  And it wasn’t just the main course either.  They brought salads, veggies, and even dessert.  Pretty much all I supplied was the milk.  We hadn’t asked for the help, but that made it all the more meaningful.  They anticipated our need before we even expressed it.  It gave me more time to just dote on Cassie and our new baby girl.  It gave me time to make sure Eve was doing okay and to spend time with her, too.  It was just a tremendous blessing to our family.  These people not only WENT to church, but they WERE the church.  And that’s what I believe God calls on all of us to do – to be the church in the world today.

That doesn’t mean what we do here isn’t important.

Worship is the heartbeat of all we do.  I know if it wasn’t for a worship service that touched my heart, I don’t think I would have stayed around long enough to know that God wanted me, too.  Good sermons not only teased my brain about who God was, but gave me the confidence to keep asking questions.  Incredible music uplifted my spirit and revealed God to me in a new and different way.  Missions work is important.  If it wasn’t for the opportunity to connect to our community and our world, I don’t know if I would have had a broader view of what it meant to be a follower of Christ.  Volunteer opportunities were important to help me test my own gifts and see where I could contribute.  And obviously, small groups were important for me.  It was where I was best able to see how what we learned in worship lived itself out in life.  So what we do as a church is important.  But never forget this.  Jesus didn’t give his life for us just so we could GO to church.  He wanted us to BE the church, too.  In the name of the Father and of the Son and of the Holy Spirit.  Amen.

[1] I wish I could claim credit for that snappy line, but I heard it from someone else and if I ever figure out who, I will give them full credit!

← Equal in All Things
Love Without End, Amen →