What You Leave Behind 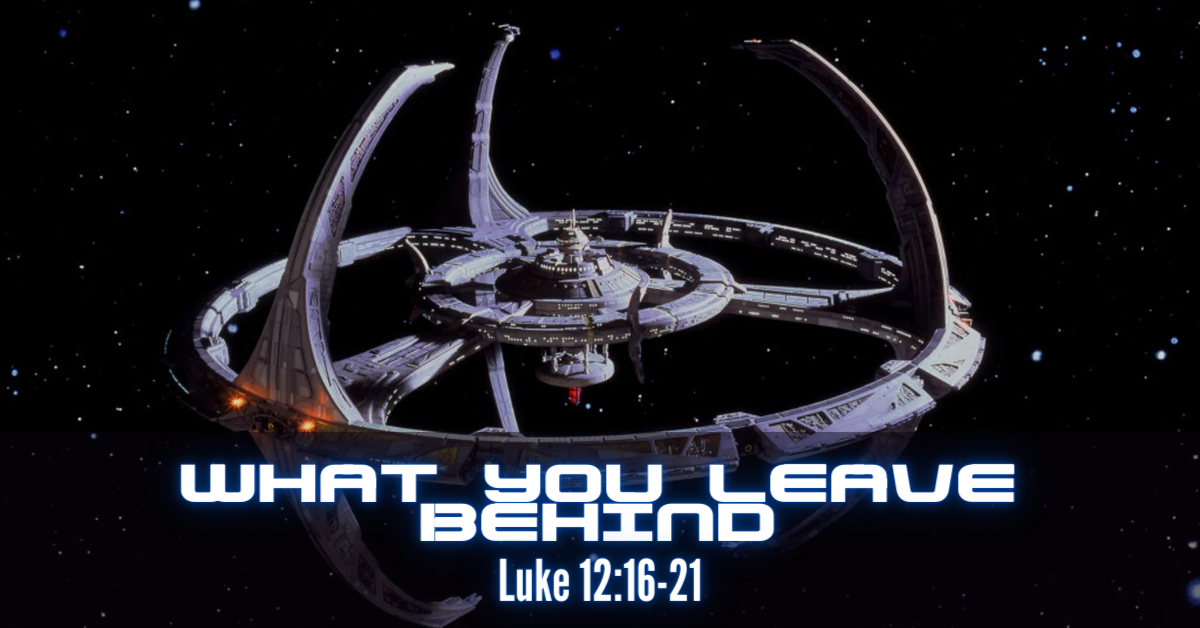 What is the legacy you will leave behind?

There is a deep-seated need in each of us to know we matter, to know that our lives make a difference. We want to feel we contributed something to this great tapestry of life and we want to leave the world a better place than we found it.  That’s a noble sentiment and definitely in line with what God wants for us.  But in our need to leave some kind of lasting legacy, sometimes we get confused as to what that legacy should be.  Sometimes we forget what is truly important and we focus on the wrong things or pursue our legacy in ultimately meaningless ways.  Many people think fame or even infamy is the key to a lasting legacy.  One only has to look at the spate of mass shootings to see that reality.  There’s the erroneous belief that if somehow your name gets written down in some history book no matter the reason, we will live on forever.  But I have news for you.  Your eternal destiny isn’t determined by having your name in some book other than the Book of Life.  If you’ve never heard the term before, the Book of Life is a metaphor for the people who make it into Heaven.  That’s the only “book” that matters if your name is in it.  If you believe in an afterlife, and if you’re here you probably do or at least you’re thinking about it, then the key to success isn’t your fame here on Earth, or your wealth, or your power.  When Matthew encouraged us to store up treasures in Heaven instead of down here, this is what he was writing about.  To leave a legacy that matters isn’t about building up ourselves but building up the Kingdom of God by making a lasting impact on the lives of others.

If we’re relying on history to make us immortal, we need something better.  What actually happens in the world and what becomes “fact” are sometimes very different things. And the “facts” can change rapidly.  In my own lifetime, I found out Christopher Columbus did NOT discover America despite being told that was the case for many, many years.  In fact, Columbus wasn’t even the first European to land in North America. That distinction goes to Leif Erikson and the Viking people who came sometime in the 10th century, fully five hundred years earlier.[1]  But even Erikson didn’t “discover” America. Long before either one of them came, the ancestors of what we know today as Native Americans had migrated at least 10 to 13,000 years before.  It’s only a Euro-centric view of the world that has us believe America didn’t exist before Europeans came to colonize it.  Here’s something interesting. The names of the boats Columbus used were NOT the Nina, the Pinta, and the Santa Maria.  Nina was actually a nickname for his boat called the Santa Clara.[2]  But I guess that doesn’t roll off the tongue as well.  Next thing you know, someone will tell me that Pluto is not a planet.  If we’re looking to leave a legacy that matters, we have to consider what that might be because the answer doesn’t lie in recorded history, but on the work that we do to make a difference.  Ultimately, our biggest impact is far more personal.

Jesus tried to tell his followers that through a parable.

If you have a Bible or a Bible app on your phone, would you please turn to Luke 12 beginning with verse 16.  Luke 12:16.  In this story, there are literally thousands of people trying to listen to what Jesus has to say.  Luke doesn’t tell us and he probably didn’t know how many of those people were actually followers of Christ and how many were just there to be with the “in crowd.”  Jesus is the greatest show in town!  This guy is performing downright miracles!  At any time, he might heal a sick child or turn water into wine or bring someone back from the dead.  Who knows what might happen next?  So there are thousands crowded around and hoping to be part of history and from out of the crowd, one guy shouts, “Jesus, tell my brother to divide the inheritance with me.”  Back in Jesus’ time, if you were the firstborn male, you received a double portion of the inheritance and in all likelihood this guy wasn’t the firstborn.[3]  So instead of answering him directly, Jesus tells him this parable.

And he told them this parable: “The ground of a certain rich man yielded an abundant harvest. 17 He thought to himself, ‘What shall I do? I have no place to store my crops.’

18 “Then he said, ‘This is what I’ll do. I will tear down my barns and build bigger ones, and there I will store my surplus grain. 19 And I’ll say to myself, “You have plenty of grain laid up for many years. Take life easy; eat, drink and be merry.”’

20 “But God said to him, ‘You fool! This very night your life will be demanded from you. Then who will get what you have prepared for yourself?’

21 “This is how it will be with whoever stores up things for themselves but is not rich toward God.” – Luke 12

That’s what my friend John would call this.  These are problems of abundance instead of scarcity.  This guy’s big problem is not starvation or homelessness.  His big problem is he doesn’t have enough room for all the grain he has.  “What shall I do?” he says, “I have no place to store my crops.”  He has an embarrassment of riches, but he THINKS he has problems.  If only he opened his eyes to the blessing he already has. It’s like that scene from Friends where Ross is torn between Julie and Rachel and he says, “What am I gonna do?  This is a complete nightmare.”  And Chandler responds, “Oh, I know.  This must be so hard.  Oh, no! Two women love me.  They’re both gorgeous and sexy.  My wallet’s too small for my fifties and my diamond shoes are too tight!”  Which is essentially what God says to the guy in the parable.  “You think you have a problem?  Tonight, you’re going to die and then what will you do with all of your wealth?”  With all of that food, he could have feed the hungry or helped the poor but instead he’s worried about how he can hoard his wealth so he can kick back and relax for the rest of his life.  The same is true to a lesser degree to the guy who wanted Jesus to tell his brother to share his inheritance.  Instead of bemoaning his father’s death, instead of being grateful for this sudden windfall in his life, he looks to what his brother has and decides to ruin his relationship with him instead.  He is focused on the wrong things.  Jesus wants us to spend more time on what’s really important and let go of what the world tells us is important. The Greek statesman Pericles said it best when he said, “What you leave behind is not what is engraved in stone monuments, but what is woven into the lives of others.”[4]

Dr. Thom and Dr. Crehen were my pediatricians growing up.

Neither one of them has a building named after them or a school or a temple, but both of them made an indelible mark on my life.  I used to go to the doctor’s office every other week because of my tonsils.  I had tonsilitis all the time.  So much so that at five years old I had to have them taken out. But something in their demeanor, in their care for me, and the way they helped me made such a difference in my life that for the longest time I wanted to be a pediatrician.  Helping others like they helped me was such a life changer that it shaped who I was and what I wanted to become.  Ultimately, I didn’t go that way thanks to Chem 11A at UCLA, but it still ended up directing me to where I am today.  I’m still in the business of helping others, just in a different way.  Now, they may not be famous by the world’s standards, but they are everyday heroes to me.  And there are others, too.  Ms. Stein-A who believed in me, encouraged me, and gave me opportunities to succeed.  Lisa Starr who stood up for me against the crowd as a freshman in high school.  Steve from Alpharetta First who shared his wisdom with me when I was going through a tough time.  And too many more to name.   That doesn’t even include my family and friends who have stood by me and been there for me my entire life.  Those are the people whose legacy endures in me.

What will be your legacy?

How will you make a difference in the lives of those around you?  Each of us has the ability to make a life changing impact for the people around us.  Our names may not be remembered in a history book.  We might be like Leif Erikson and be largely forgotten.  We may not have a statue raised in our honor or a building named after us.  But ultimately those things are impermanent.  As Jesus told the disciples in Luke 21:6 as they were marveling at the beauty of the temple, “As for what you see here, the time will come when not one stone will be left on another; every one of them will be thrown down.”  And yet the impact of what we do and of who we are might be felt for generations to come.  We can and do make a difference.  What kind of difference you make, the legacy you leave, is largely up to you.  There’s a song by Randy Travis, the country singer, called “Three Wooden Crosses” and in it he sings a line that particular rings home for me.  He sings, “I guess it’s not what you take when you leave this world behind you.  It’s what you leave behind you when you go.”  In the name of the Father and of the Son and of the Holy Spirit.  Amen.