The 12th Day of Christmas 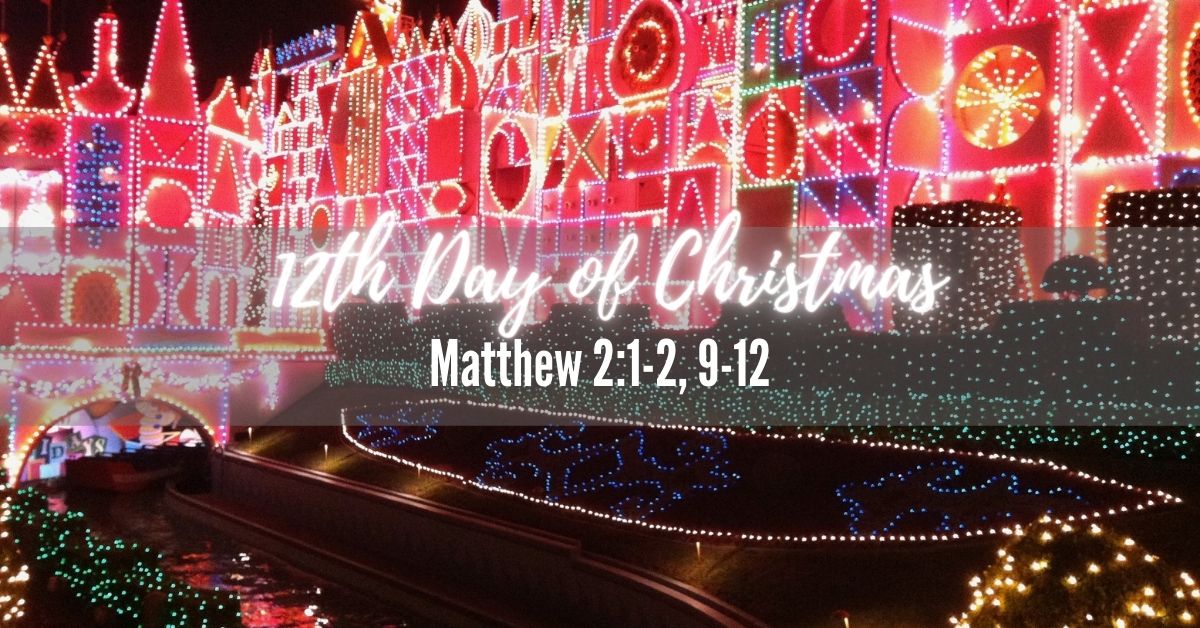 Christmas is not what you think it is.

Everyone, whether they are religious or not, knows December 25th is when we celebrate the birth of Jesus.  Except he likely wasn’t born then.  I’ve heard two different theories about why that date was picked, but neither  involved Jesus ACTUALLY being born on that date.[1]  And although most nativity scenes show Jesus born in some kind of barn or stable, it’s just as likely he was born in a cave where many Israelites kept their animals.[2]  .  Speaking of animals, most of us picture sheep, cows, donkeys, maybe even some camels at the birth of Christ, but if you read it carefully, there is no mention of any animals present at Jesus’ birth.  But perhaps what trips up people the most is the song “The 12 Days of Christmas.”  It sounds like a countdown song to Jesus’ birthday, but ACTUAALY, December 25th is the FIRST day of the 12 days of Christmas.  The twelve days after Christmas are considered Christmastime.  So, on Christmas you would have received the LEAST number of gifts, not the most.  And at the end of it all, was the Christian holiday of the Epiphany.  Believe it or not, Epiphany used to be bigger than Christmas and was one of the most celebrated days of the year.  But now, it’s a little-known Christian observance instead of one of the most pivotal moments in the Christian calendar.

But what is Epiphany?

Epiphany is the day when the magi arrived to honor the Christ child.  We often think the magi arrived on Christmas Day, but if the star they saw in the sky was indeed the Star of Bethlehem that rose at Jesus’ birth, it would have been much later that they would have arrived.  Some speculate that it could have been as much as two years later.[3]  Adam Hamilton in his book Christianity and World Religions writes these magi were not “kings” but Zoroastrian priests – followers of a completely different faith who believed the stars revealed certain truths about the universe.[4]  Zoroastrianism was originated in what is now modern-day Iraq[5] – about 1,200 miles away from where Jesus was born.  That trip would have taken two to three months if they left the moment they saw the star, but it’s more likely they would’ve prepared for the journey before undertaking it.[6]  They would have had to round up their supplies, the animals, the gifts, and their families or staff.  That only three of them went on this massive journey would have been unlikely.  So where did the number three come from and why did people assume they were kings? Let’s listen to the source itself.  The story of the magi is only in Matthew’s version of the Gospel so we’ll read that passage this morning.

After Jesus was born in Bethlehem in Judea, during the time of King Herod, Magi from the east came to Jerusalem 2 and asked, “Where is the one who has been born king of the Jews? We saw his star when it rose and have come to worship him.”

Herod upon hearing this, became frightened because he believed like most other Jews, that the savior would come and take control of Israel.  That would mean Herod and his family would lose power if this child ever came to claim the throne.  Fearful for his crown, Herod secretly met with the magi and sent them to Bethlehem to search for the Christ child, with every intent of killing this possible threat.  The story continues.

9 After they had heard the king, they went on their way, and the star they had seen when it rose went ahead of them until it stopped over the place where the child was. 10 When they saw the star, they were overjoyed. 11 On coming to the house, they saw the child with his mother Mary, and they bowed down and worshiped him. Then they opened their treasures and presented him with gifts of gold, frankincense and myrrh. 12 And having been warned in a dream not to go back to Herod, they returned to their country by another route.

The Epiphany is about the revelation of Christ to the world.

And the reason this is so significant is that it proves God’s intention to include ALL of humanity in his plan for salvation.  It was the first time people outside the Israelites saw Christ and believed He was the Messiah!  It was the moment God’s covenant in Christ was extended to everyone.  Paul understood this as he proclaimed the Word of God to the Romans.  He says in chapter 3, verse 29, “Is God the God of Jews only?  Is he not the God of Gentiles too?  Yes, of Gentiles too…”  And then in Romans 10:11-13, Paul continues, “As the Scripture says, “Anyone who trusts in him will never be put to shame.” For there is no difference between Jew and Gentile—the same Lord is Lord of all and richly blesses all who call on him, for, “Everyone who calls on the name of the Lord will be saved.”  Most of the Jewish people believed God was the God of the Jews, that God would only be revealed to the people of Israel and those who did not follow the faith according to Torah would never be accepted by the Lord.  Even most of the Gentile converts believed they had to become Jewish according to the law for Christ to accept them.  Men were having adult circumcisions to comply with Jewish tradition and Paul had to write to the churches in Rome, Corinth, Galatia, and Colossae to tell them to stop!  Not only was it extremely painful, but it could result in infection or even death.  Paul had to overcome that gut reaction to tradition and explain that it wasn’t necessary.  Christ accepted them as they were. In Galatians 5:6 he wrote, “For in Christ Jesus neither circumcision nor uncircumcision has any value.  The only thing that counts is faith expressing itself through love.”

What it meant to be a “chosen people” radically changed with Jesus.

Instead of it being a “Jews only” club, the Israelites found out it was the polar opposite.  They became God’s ambassadors to the world.  It was going to be up to them to bring people into the fold.  I’m sure it was a shock to many of the Jewish people.  To so radically have your understanding of God flipped on its head must have been tough to process.  But God knew these were the right people to share his message.  And God didn’t stop there.  God was reaching out to the rest of the world in ways that the rest of the world would understand – like these Zoroastrian priests.  He didn’t bring this collection of Zoroastrian priests to Christ DESPITE their faith in another religion, but THROUGH their faith.  It might seem like a contradiction if you read other parts of the Bible.  After all, these Zoroastrian priests relied on astrology to figure out Jesus was the Christ child.  And in the book of Deuteronomy, Moses tells the people of Israel, “Let no one be found among you who sacrifices their son or daughter in the fire, who practices divination or sorcery, interprets omens, engages in witchcraft, 11 or casts spells, or who is a medium or spiritist or who consults the dead. 12 Anyone who does these things is detestable to the Lord… (Deuteronomy 18)” Yet, God uses the priests’ belief in astrology to bring them to Jesus.  Why were the Israelites forbidden from things like astrology and other sorts of divination when it worked for the magi?  It’s because once you know Christ as Lord, to rely on these other forms of faith is to lose faith in Christ.  But to those who do not know Christ as Lord, God reaches out to them in ways they can understand.

It’s continued evidence of God’s love for all of creation.

Epiphany is such an important part of our Christian calendar because it opened up our idea of salvation to be for everyone.  And just as God has opened up his love for us, we too can open up our love for others, for not only do we gain hope from this day, but an example of the kind of love God wants us to express to all of those around us.  Because when you understand how God loved us despite all our faults and failings and how God continues to reach out to the world despite so many who reject him, you begin to see how great God’s love is for us.  And you also begin to understand how our own prejudices set us against one another when God wants us to instead reach out in love.  We have to continually challenge ourselves to put aside our own biases and our own misconceptions about others and learn to love each other.  That is the true meaning of the Epiphany.  God’s acceptance of us all.  Dennis Bratcher summarized these thoughts in a simple but beautiful prayer that I’d like you all to join me in as we close our message today.  Please bow your heads.

“Father, we thank you for revealing yourself to us in Jesus the Christ, we who once were not your people but whom you chose to adopt as your people. As ancient Israel confessed long ago, we realize that it was not because of our own righteousness, or our own superior wisdom, or strength, or power, or numbers. It was simply because you loved us, and chose to show us that love in Jesus.

As you have accepted us when we did not deserve your love, will you help us to accept those whom we find it hard to love? Forgive us, O Lord, for any attitude that we harbor that on any level sees ourselves as better or more righteous than others.  Will you help us to remove the barriers of prejudice and to tear down the walls of bigotry, religious or social?  O Lord, help us realize that the walls that we erect for others only form our own prisons!

Will you fill us so full of your love that there is no more room for intolerance. As you have forgiven us much, will you enable us with your strength to forgive others even more? Will you enable us through your abiding Presence among us, communally and individually, to live our lives in a manner worthy of the Name we bear?

May we, through your guidance and our faithful obedience, find new avenues in ways that we have not imagined of holding the Light of your love so that it may be a Light of revelation for all people. We thank you for your love, praise you for your Gift, ask for your continued Presence with us, and bring these petitions in the name of your Son, who has truly revealed your heart.  Amen”[7]

[1] The first and most popular theory is that the church wanted to find an alternative to the merry-making around a celebration of Saturnalia and devised Christmas to focus people on something more holy.  The second and less well known theory involves the supposition that Christmas Day was about nine months after Passover and thus links the two dates together.  Jesus’ death and Jesus’ Second Coming – although why they didn’t instead make Christmas nine months before Easter would be a mystery.

[2] A cave provided better shelter and didn’t require much construction other than a fence.