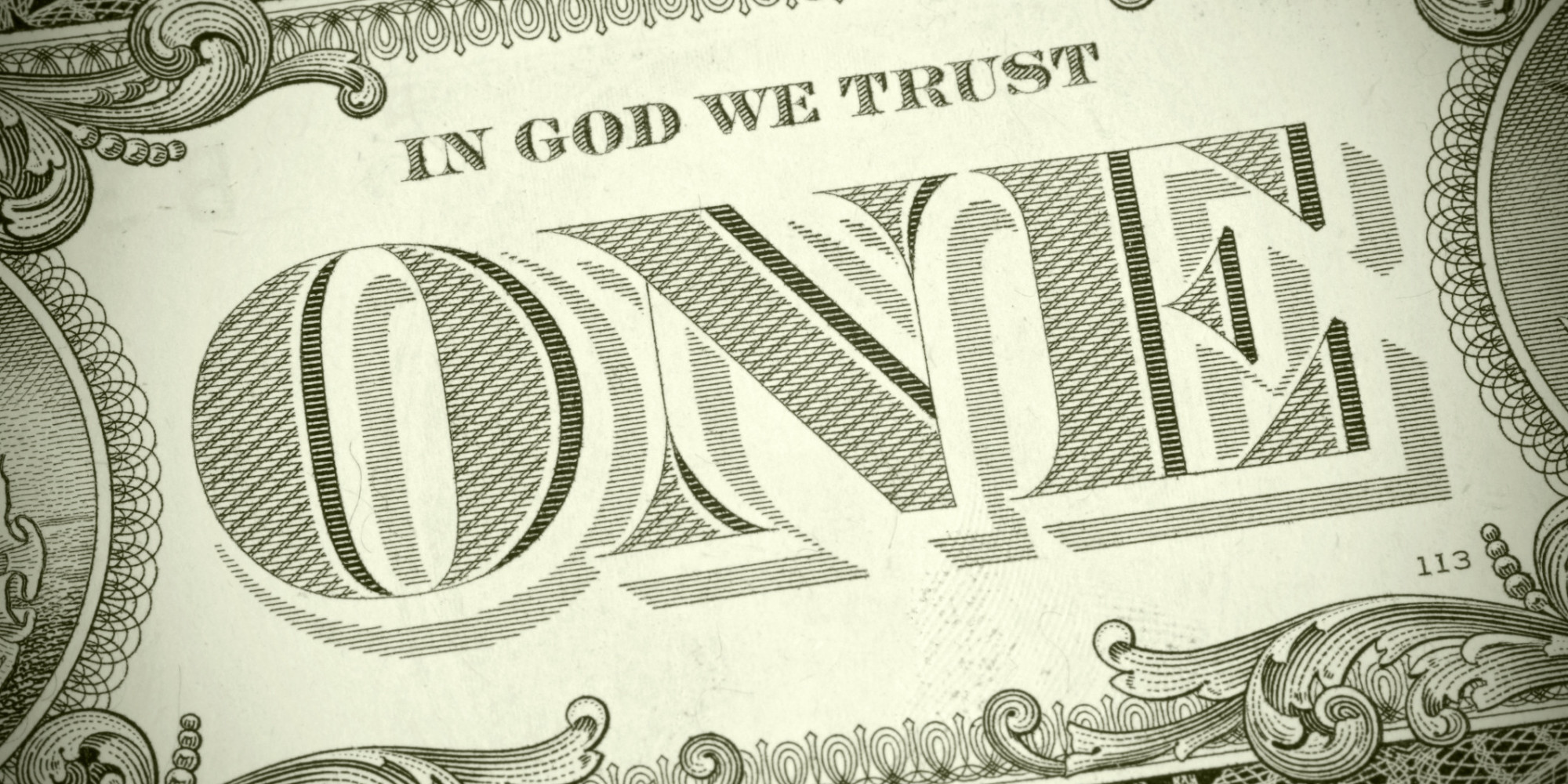 19 “Do not store up for yourselves treasures on earth, where moths and vermin destroy, and where thieves break in and steal. 20 But store up for yourselves treasures in heaven, where moths and vermin do not destroy, and where thieves do not break in and steal. 21 For where your treasure is, there your heart will be also.

24 “No one can serve two masters. Either you will hate the one and love the other, or you will be devoted to the one and despise the other. You cannot serve both God and money. – Matthew 6:19-24 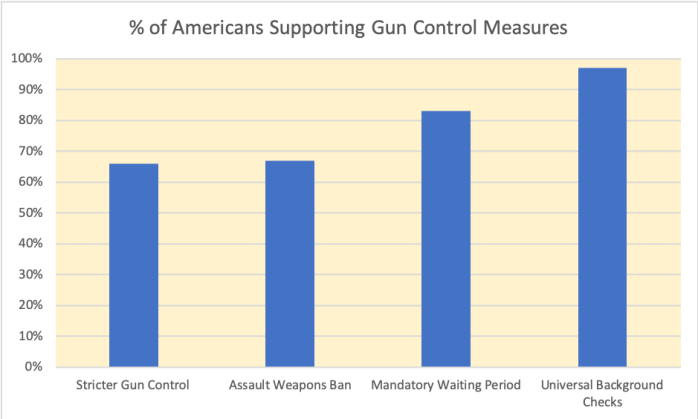 When is enough, enough?

Did you know that 66% of Americans support stricter gun control laws, from both sides of the aisle?[1]  I was surprised to find out 67% support an assault weapons ban, 83% support a mandatory waiting period, and a whopping 97% of Americans support universal background checks.  I guess that last 3% are officers of the National Rifle Association.  What’s more surprising is that despite the overwhelming numbers the Senate won’t even bring up the subject.[2]  At all.  In the face of both overwhelming factual evidence on the efficacy of gun control laws, the number of studies that prove gun control to be effective, AND the overwhelming support of the American people, enough Senators in the United States Congress are able to stem the tide against even talking about the subject.  This in the wake of yet another high school shooting. Just this year alone we have had 370 mass shootings, 441 deaths, and 1,466 injuries.[3]  That’s just this year.  So when is enough, enough?

What does it take for people to simply do the right thing?

When will our lust for money, power, and fame be overcome by doing the decent, right, and honorable thing?  In a world of “alternative facts” it isn’t enough to have the Truth to convince people to do the right thing.  Scientists have warned about the effects of global warming since 1988 when record temperatures, drought, and wildfires spread across the United States.[4]  Yet we have not taken the threat of climate change serious enough to prevent global catastrophe.[5]  Tobacco companies knew for decades that cigarettes were causing people to die, but they continued to peddle them to little kids with cute mascots and idealized pictures of people living “the good life.”  And now we have companies like San Francisco based JUUL trying to get kids addicted in a new way!  They have aggressively marketed to children who have never smoked before and appealed to them through slick and misleading advertising.[6]  Children as young as 13 are suffering from lung injury related to vaping.  Of the over 2,000 reported cases of injury, 14% of patients are under 18 and 79% are under 35.  Most of the 42 deaths have been older people ranging in age from 17 to 75.  Ironically, a friend of mine who is a pastor knows one of the Vice Presidents at JUUL and both have children who are in the same class.  My pastor friend’s daughter did a report on the health effects of vaping and the Vice President came up to my friend and said he was very concerned and would like to know what JUUL could do to help.  I don’t know.  Maybe stop selling these products to kids?  Maybe stop selling these products with fruity flavors?  Maybe stop selling things that are harmful and addictive?  Seriously, what does it take to do the right thing?

But these are massive problems.

They seem overwhelming to each of us. What can we do as the people of God?  We can stand up for what’s right.  We can help one another.  We can lift one another up.  We can be there for each other and make the tough choices to make the world a better place.  Mario Teyacheya was the Draco Malfoy of my elementary school days.  He was the local bully and he liked to pick on other kids in our class.  He always hung out with these two thugs, kind of like Crabbe and Goyle in the Harry Potter books.  Mario was a punk kid with a skinny frame and long wavy hair, and he liked to punch people.  He’s the kid in class who knew the principle on a first name basis.  He’d challenge other boys to meet him after school and if you didn’t show up, he’d tell people you were a chicken or a wimp.  As you can imagine, his prowess at beating people up grew, even though I don’t know of anyone he actually fought.  Well, I avoided Mario as much as possible, but finally, Mario cornered me and challenged me to a fight.  I was pretty worried, but I didn’t want to be labeled a chicken, so I showed up wondering how bad it was going to be.  Sure enough, Mario shows up with his two goons, picking at his teeth as he approached.  Word had got around about our fight and a couple of kids showed up to watch.  No one offered to help, they just wanted to watch the carnage.  So there I stood as Mario walked up, getting ready to punch me when suddenly, my friend Greg Pillioglas came out from the door next to me and yelled at Mario, “Back off or you’ll have to fight me, too!”  The three of them just looked up at Greg, turned around, and ran off.  See, Greg was about a foot taller than me, and in 3rd grade, a foot is a big deal.  He was stronger than anyone in the class, and everyone knew it, and he was my friend.  Greg and I didn’t hang out or anything, but I always helped him do his math. Math was always one of my strong subjects so I would help him out.  He was always grateful and once told me, “If you ever need anything, you just let me know and I’ll help you out.”  I thought that was a nice thing to say, but on that day, I knew Greg meant it.  He asked me if I was alright, and I told him “Yeah, just mad was all.”  And he said to me, “If anyone gives you trouble again, you tell me and I’ll come beat them up for you.”  No one ever bothered me again.  Greg was a hero, and not because he was tough, because really he wasn’t.  Greg was one of the nicest guys I’ve ever known. But he was a hero because he stood up for me when I needed it.  He could easily have done what every other kid including my friends did and stayed away, but he didn’t.  He got involved.  He did what he thought was right even though that meant putting himself at risk.  And that’s what Christ calls on us to do every day – to make the tough choices and do what’s right.  We tend to think of standing up for what’s right on these grand scales of global consequences, but the most effective changes, the ones that change the world, are often the ones that start in the hearts and minds of people like you and me simply doing the right thing instead of what’s easy or convenient.

As we heard in his story (above), Daniel could easily have given in to the king’s demands.  After all, they weren’t unreasonable and Daniel was hand-picked as being among the best of Israel’s people.  He was on the fast track to a career as a civil servant.  He was even being fed food from the King’s table!  But Daniel didn’t want to violate the commitment he had made to God.  His faith was that important to him so he refused to eat what the others were eating and his friends followed suit.  The official in charge of taking care of them told Daniel, “Hey, I get it, but I don’t want to die just because you won’t eat the King’s food.  Can’t you give me a break?”  So Daniel made a deal with him.  “Give me ten days to show you what living a life like my God has asked me to live can do and if we aren’t at least as healthy as everyone else, you can turn us in.”  It would have been so easy to follow along with what everyone else was doing.  It would have been so easy to just eat the King’s food and drink the King’s wine.  But instead, Daniel stood up for what he believed in.  Not with disrespect but with bravery and boldness, willing to accept the consequences.  And God was there for him.

It’s often very difficult.  It’s always tempting to take the easy way out.  Or the expedient way.  Or the way that profits us in the short term.  But doing the right thing can change the world.  Not doing the right thing can also change the world, sometimes in tragic ways.  I’m reminded of Martin Niemoller’s famous poem.  Martin was a Lutheran pastor in Germany during World War II.  At first he supported the Nazis as did many Germans, until the Third Reich decided to take control of the churches.  He spoke out frequently against the Nazi regime, often landing him in prison and eventually in a concentration camp.  He was liberated in 1945, and is most well known for a poem he wrote in response to a student who asked “How could it happen?”[7]  Indeed, you would think that it would be impossible for an entire country to stand by and watch this horror occur, but we all know it did.  “How could it happen?”  Niemoller responded by writing his famous poem:

Category: Faith, SermonsTags: Do the right thing, trusting in God