How well do you deal with change?

If you’re George Banks…not very well. George’s daughter is getting married.  That alone is enough to trigger the panic that overcomes people going through change, but because it happens so suddenly George is REALLY out of sorts.  And when his daughter and his wife have different ideas about what the wedding will look like, George becomes overwhelmed.  He becomes obsessed with how much this is going to cost and is ruining what should otherwise be a happy time for all of them.  So after another “wedding rant,” his wife Nina sends him to the store to get something for dinner.  And this is what happens.

One of my favorite scenes from the modern day version of Father of the Bride (if you can call the 80’s modern day). George LOSES it!  He becomes irrational in a quirky, charming, “he’s kinda right” sort of way.  But there’s no doubt he goes a little off the deep end.  And we laugh or smile because it’s funny, but you think to yourself, “I would never do that,” but are you sure?  Because all of us have had times in our lives when we were resistant to change.  All of us have had doubts or fears about what the future holds for us.  And at least most of us have, at one time or another, not reacted very well to it.  Every church I’ve ever served has had its share of George Banks.  Every pastor I know can tell you a George Banks story.  My friend Brett was serving a church that at one time was a thriving downtown church, but as things go, people moved away, the congregation stopped reaching out to the neighborhood, and this one growing and vibrant community of faith was shrinking every year.  So Brett decided to energize the congregation to reach out to the community!  He started doing programs to help the church grow!  He found ways to engage people and to make the church relevant again!  And people started to come.  Not in droves, but new faces started showing up.  Not long afterward, one of the members of the church, an older guy who had been there a very long time, came up to him and said very plainly, “I don’t want the church to grow.  I like it just the way it is.  I don’t want people from the neighborhood to come to our church and if they do I might just have to leave.”  I have to admire the man’s honesty if nothing else (and truly nothing else).  He said out loud what many people think or subconsciously feel.  He didn’t sit around and criticize the programs or the pastor, he was honest that deep down, he liked things the way they were and didn’t want that to get all messed up.  Sadly, he left. 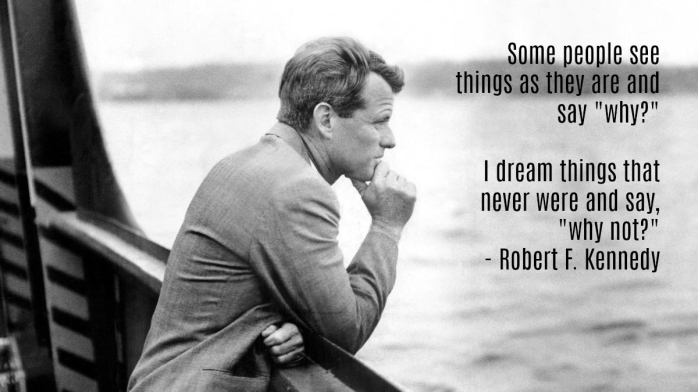 Deep down, he had a fear of change.

But the question I wonder if he ever asked himself was, “What if it could be even better?”  What if this once thriving church could become thriving once again?  What if there were kids roaming the halls like there used to be?  What if worship looked like 200 instead of 20?  What if?  Did he ever ask himself THAT question?  It might have inspired him to stay.  It reminds me of a quote Bobby Kennedy once said, “Some people see things as they are and say why?  I dream things that never were and say, why not?”[1]  Do you ask why or why not?  Maybe this guy who didn’t want things to change subscribed to the old adage, “A bird in the hand is worth two in the bush.”  I’d have to question him on that one.  I’d say to him, “a bird in the hand is great, but then what?  Eventually the bird will die and you’ll have nothing, but two birds?  Two birds could have baby birds and could become many and together they could last you your whole life!”  True, you have to take a chance for that all to work out.  And there’s no guarantee it will.  But isn’t that just part of life?  Sometimes it works and sometimes it doesn’t, but do we fear change so much or failure so much that we won’t even try?  I would hope we have enough trust in God to overcome that fear.

Fear is nothing new.

It was a problem from the very beginning of time.  If we use the Bible as a reference, we see the topic of fear come up from Genesis to Revelation.  God and Jesus are constantly telling us “do not be afraid.”  And yet so often we are.  Not without good reason.  But fear often paralyzes us or worse compels us to do things that are hurtful or mean or unkind.  Now, the Pharisees and others like them, liked things the way they were.  They got pretty comfortable with how things were being run and then here comes this guy, Jesus, who kept trying to shake things up.  He eats with sinners, he associates with women and children, and as we’re about to read, he works on the Sabbath! Sacrilege! But is it?  Let’s hear what Luke writes about it.

10On a Sabbath Jesus was teaching in one of the synagogues, 11and a woman was there who had been crippled by a spirit for eighteen years. She was bent over and could not straighten up at all. 12When Jesus saw her, he called her forward and said to her, “Woman, you are set free from your infirmity.” 13Then he put his hands on her, and immediately she straightened up and praised God.

(For eighteen YEARS this poor woman has been afflicted and Jesus comes and just by putting his hands on her, heals her instantly, but that’s not what the leaders of the synagogue focus on.  Here’s what it says):

15The Lord answered him, “You hypocrites! Doesn’t each of you on the Sabbath untie his ox or donkey from the stall and lead it out to give it water? 16Then should not this woman, a daughter of Abraham, whom Satan has kept bound for eighteen long years, be set free on the Sabbath day from what bound her?”

(Jesus is shocked at the synagogue ruler who completely disregards the miracle he has just witnessed and instead focuses on “following the rules.”  He calls them hypocrites and then basically scolds them by saying, “If you believe that God cares about you, his finest creation, more than he cares about an ox or a donkey, then why wouldn’t he show mercy on the Sabbath to one of his children if you’re allowed to give water to your animals?”)

17When he said this, all his opponents were humiliated, but the people were delighted with all the wonderful things he was doing.

Just as fear is nothing new, change is nothing new either.  Change is LITERALLY as old as time.  Once there was nothing, and then there was light!  But change was something the Pharisees had a hard time accepting.  While intellectually they might have understood things change, in their heart they didn’t want to believe that included them.  It’s hard to give up doing things the way we are used to doing them.  These men trained their whole lives to achieve their position in society.  They sacrificed, they worked hard, they did what they thought they were supposed to do and then here comes this upstart trying to tell them to do it differently?  They became offended as if Jesus was telling them they were bad people, even though that’s not what he was saying.  That’s true of many of us, too.  When we’re told we need to change, it’s hard not to take it personally as if we did something wrong.  But often change isn’t about our character, but about our effectiveness.  For us to achieve the goals, dreams, and desires of our heart, we have to find better ways of doing things.  We’ve always got to be willing to change, to let go of the old ways in order to get the results we hope for. And that’s what was happening here.  Jesus was trying to show them a better way. The Pharisees were all hung up on observing the Sabbath, but they forgot why the Sabbath was created in the first place.  It was meant to be a day to honor God.  To pay homage to the greatest feat in all of creation – creation itself!  And so Jesus challenged them.  He challenged them to remember what was truly important.  Not this so-called definition of “work” but the idea that the Sabbath was created to honor God, and could any of them really say that healing this woman wasn’t a way to honor God?  The Pharisees had a lot of George Banks in them that day.

But it doesn’t have to be bad.  Change is necessary. But we can choose to embrace it or fight it.  How we deal with it, how we confront it, will often determine how effective we can be.  Will you be like George Banks or will you instead trust in God to lead you through the change?

← What You Leave Behind…
Be The Change →