Remind the people to be subject to rulers and authorities, to be obedient, to be ready to do whatever is good, 2 to slander no one, to be peaceable and considerate, and always to be gentle toward everyone.

3 At one time we too were foolish, disobedient, deceived and enslaved by all kinds of passions and pleasures. We lived in malice and envy, being hated and hating one another. 4 But when the kindness and love of God our Savior appeared, 5 he saved us, not because of righteous things we had done, but because of his mercy. He saved us through the washing of rebirth and renewal by the Holy Spirit, 6 whom he poured out on us generously through Jesus Christ our Savior, 7 so that, having been justified by his grace, we might become heirs having the hope of eternal life. -Titus 3:1-7

This is not the Easter I imagined.

I’m betting it’s not the one you imagined either. As early as a couple of months ago, I was already deep into planning the Easter weekend.  We start talking about it as a staff right after Christmas.  First, just the rough edges and then as it gets closer and closer, we get down to the nitty gritty.  I had a whole sermon series planned leading up to the big day!  Already had a postcard designed and ready to drop in the mail around the neighborhood; 4,000 copies about to be printed and sent out to invite people to come to Easter Sunday worship. And then this happened. Every day, it seemed like something new was happening.  Every day, someone else was getting sick from the virus. Every day, new orders were issued, new developments were happening, new cases were cropping up. Then the dominoes really started to fall.

We all had questions. We were all seeking answers.

How do I know if I have the virus? Should I be wearing a mask?  Do I have to wash my potato chips I just bought from the store?  And what is going on with the run on toilet paper?  As a church community, we began asking questions, too. Lots of them. And just like it was with the rest of the world, the answers changed from week-to-week and sometimes from day-to-day.  It just seemed to be a time with a lot of unknowns. Life as we knew it changed seemingly overnight.  And people are really bad with change. We deal with it because we have to, not because we want to. Many of us struggle with change especially when it comes to the things we hold most dear like family, friends, and faith.  The worst part was no one seemed to have any definitive answers. Even now, we continue to have questions. We keep making the best guesses we can, but there is still so much we don’t know. It’s been a time of anxiety, of doubt, and of fear.

Which makes Easter all the more relevant for us today.

Jesus’ followers must have felt the same way. Their whole world had been turned upside down.  This man who they called Lord and Savior just died. And not from natural causes but because his own people had condemned him to death. If you really believed that Jesus was the Son of God, then how could he die such an ignoble death? He died on a cross with common thieves.  Nothing was as it should be. It was a time of anxiety, doubt, and fear.  They probably asked each other the same questions we find ourselves asking today. What next?

It seems like we’re going through our own Good Friday.

It’s not an exaggeration to say none of us have experienced an Easter like this one.  While we are confident the world will go on, we’ re not sure how different it will be when we get to the other side.  We don’t know who is going to make it. And we’ re not sure when we’ll get there.  It’s the waiting and the lack of clarity that is making us even more anxious and filled with worry and fear.  It’s like the whole world is on pause. God pushed the big stop button up in the sky and the world has ground to a halt. Except that it hasn’t. Not completely. With the economy nearly at a standstill all, people are getting furloughed or laid off at an alarming rate. One of my close friends just lost her job of 23 years. Those lucky enough to still have a job are sometimes asked to take drastic pay cuts like one of my sisters who is working the same number of hours but at half the pay. Lines at food banks and food distribution centers are longer than ever. And people are still dying by the thousands, sometimes completely alone. My friends and I are still in shock over the death of one of our high school buddies who is one of the thousands of victims of this disease. They say it’s darkest before the dawn, but when is that dawn coming?

Still that’s why Easter is so important

If Easter has taught us anything it’s that God can use even THIS to bring us new life. God is constantly doing something new in the world. He renews our spirit, he renews our strength, and he gives us new hope. That early Easter morning when Mary was weeping beside the empty tomb, she had no idea what had happened. She assumed as most of us would that Jesus’ body was stolen. The ultimate insult. To desecrate the dead was just one more indignity to the memory of Jesus.  And whatever revelation John had when he looked in the tomb, he did’ t share with Mary because Mary was still there weeping when he went home. But then something amazing occurred. Jesus called Mary by name and her eyes sprung open as she realized who was standing before her. God had done the impossible and resurrected Christ our savior. And because Christ was reborn, we know that our God can conquer even death, that Jesus truly was the Son of God. All the doubt and fear and anxiety the disciples were feeling vanished once they realized what God was doing among them. They were given new strength and new hope so that when Jesus would eventually go back to the Father, this time they were unafraid.  They met the challenge of a world without Jesus with conviction and confidence because they knew they were not truly alone. Christ was with them.

We may not be able to see the other end of this crisis yet.

But we can have faith there is an end and it is coming. We know that all things are possible for a God who can raise the dead that we too will see our day of rising. Just as Jesus emerged from the tomb, we know that one day we will emerge from our homes and be able to engage the world in person once again. But until that day comes, we need to be strong. We need to support one another. We need to offer each other hope by being Christ in the world today. As Paul wrote to Titus, “Remind the people to be subject to rulers and authorities, to be obedient, to be ready to do whatever is good, 2 to slander no one, to be peaceable and considerate, and always to be gentle toward everyone.” Even though it’ s hard, even though it’ s tough, even though it seems at times stifling, we are doing our part to help others make it through by listening to the advice of our health experts, by sheltering in place, and by wearing our masks in public. Until there is a handle on this pandemic, each one of us is playing an important part by being as safe as we can so that as many as possible will make it through.

God made us a resilient people.

We are made of tougher stuff than we know. A few months ago, who would have thought we would be moving toward online worship? Online worship has been a blessing as much as a necessity and as the saying goes, “Necessity is the mother of invention.”  What has been remarkable to me is not only seeing so many of you adapting to this new challenge, but meeting people online who are now able to join us because of this technology. We were and are forced to come up with new and creative ways of engaging with one another and keeping connected, and even though it hasn’t been easy, it has been rewarding in ways we hadn’t imagined. Which only reinforces our need to trust in God. While all of us would have preferred for this virus never to have happened, we are stretching in new and different ways for Christ and it is making a difference. It’s like the prophet Isaiah was speaking to us directly instead of to the Israeli people millennia ago when he shared God’s words with us, 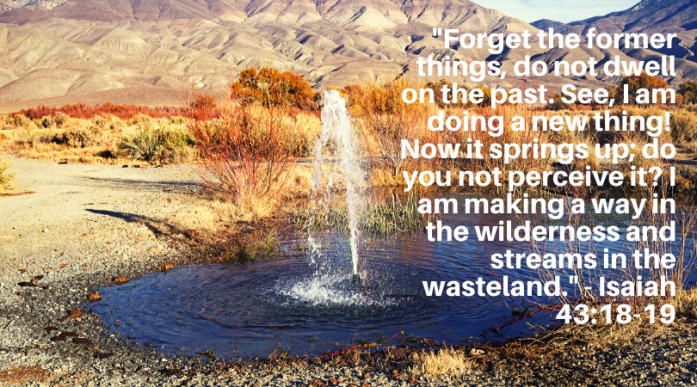 God can do things we can’t even imagine. We just need to be open and receptive to where the Holy Spirit is leading us and trust that God will lead us where we need to be.

This is a time of testing.

3 At one time we too were foolish, disobedient, deceived and enslaved by all kinds of passions and pleasures. We lived in malice and envy, being hated and hating one another.  4 But when the kindness and love of God our Savior appeared, 5 he saved us, not because of righteous things we had done, but because of his mercy. He saved us through the washing of rebirth and renewal by the Holy Spirit, 6 whom he poured out on us generously through Jesus Christ our Savior, 7 so that, having been justified by his grace, we might become heirs having the hope of eternal life.

A new day is dawning! I can’t wait for us to see what God has in store.

← I’m An American
The Fierce Urgency of Now →